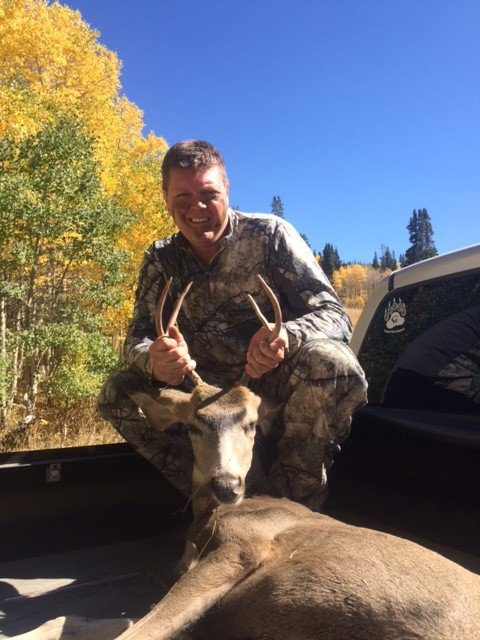 So he isn’t a monster but he is my first Muzzle Loader kill and I couldn’t be happier. Hunting here in Utah has changed a lot. We have hunted the same area for as long as I can remember and my father that introduced us to the area has hunted it even longer. It has been frustrating as I will establish my trail camera early and will get photos of some amazing bucks and as the archery season comes around they seem to disappear. Utah used to have an archery tag that covered the whole state but several years ago switched to a draw system and split the state into several units. We kept putting in for our favorite spot but would not draw out in that unit and would end up without 2 or even 3 choice. It makes it tough when you have a large hunting family but can’t draw the same units and hunt together. For us here at Addicted, one of the biggest joys of hunting is doing it as a family. As any hunter knows the success we have in the field is such a small portion of the experience. It’s the memories that we are able to make that makes hunting so enjoyable.

So last year we discovered that Utah had a dedicated hunter program that allows you to hunt all three seasons (Archery, Muzzle Loader, and Centerfire) And that a certain number of tags were reserved for dedicated hunters first before the regular draw. And that our unit only 20% of the tags were being used. So we put in for the dedicated. The dedicated allows us to take 2 deer in a 3 year period. Last year we all were skunked. This Archery Season we were skunked. So when this guy came in on the Muzzle Loader I had to take him and fill the tag.

OK time for a product plug, and for the record I am not getting paid to plug this product. Just an honest opinion of a tool I have come across and liked. So between the Utah Archery hunt and our Muzzle Loader season I was able to go out to California and go on an Archery Black Tail hunt. The guy I was with was able to make a great shot and harvest a nice buck. (unfortunately I failed to get any photos) as we prepared to process the deer the guy I was with pulled out a Havalon knife. He asked me if I had one. I told him I didn’t. He then showed me how amazing this knife was. He was able to make precision cuts with ease. There was no need to stop to sharpen the blade if it got dull he simply popped a new blade on it. But with that being said the thing never seemed to get dull it just kept cutting and cutting with ease. For my help on his hunt, he offered to get me one. So I got home shot this buck and was able to use it for the first time and was sold.

This knife made things so easy. The blades are super sharp and yet its lightweight and allows you to cut with precision like a filet knife. I highly recommend adding one of these to your pack for your next hunt.